In lieu of monologue monday

Since the next few days are going to be crazy for me I an consolodating Sunday Stuff and Monologue Monday in this post ... see you on the other side!

And so ... Friday morning, after being home one night after successful spine surgery, Toonman told me he had a hernia ... how did he know?  He GOOGLED it .. yup sure enough ...

I called our fabulous Dr TG who said 'meet me in the office at 8:30' ... after she confirmed it and expressed concern the intestine might be not getting enough or any blood she sent us off across the street to the ER.
In record time we were triaged, put in a private ER Room (!), assessed by several doctors, Toonman got x-rayed, blood drawn, the hernia literally pushed back into place (ouch) and sent up to a room in under 2 hours.
I think the way to have that happen is to have the triage nurse take your vitals and find a BP of 98/67.
Toonman says 'wow, my BP hasnt ever been that GOOD' (and he was serious) as I watched the nurse enter EMERGENT into the computer I say '98 IS NOT A GOOD THING' and simultaneously he's put into a wheel chair, RACED into the private ER room where I tell the eager interns and residents all his doctors names and insist both the surgeon and the cardiologist be called STAT; then they were to page Dr Z and/or her partner Strep.
The cardiologist, Dr L, ordered a beta blocker and things settled down while we waited on the blood work.  Within a 90 minutes he was on his way - with me schlepping his bagged clothes - up to the 10th floor were he had a window view 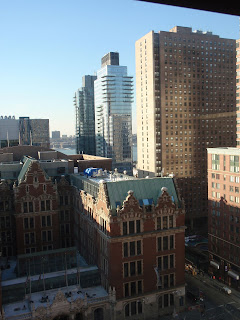 and a very nice roommate - okay, so the TV was loud but not loud enough to drown out the constantly BEEPING monitor but I liked the guy's wife, she sort of reminded me of my mom.
But when Dr Z showed up an hour or so later she told us not to get comfy because we were headed uptown to St Luke's other division where the Cardio unit is and where Dr S, a cardio-thorasic surgeon, had his team waiting along with Dr L to put in a cardio cath and surgery would happen on Monday ... WHEW .. I guess his heart wasnt in on the  'team' decision to operate in the next 'few weeks'.
We were escorted, Toonman on a gurney wrapped up like a 'taco' (that's what the adorable EMT said) and me schlepping the bagged clothing AND his cane down to the street, into an ambulance; we rode uptown where the entire Cardio Cath team was waiting (if we'd arrived at the ambulance bay I am sure they'd have all been in the street a la Grey's Anatomy or ER but we arrived at the front door and this is Manhattan not Seattle or Chicago) up on the 3d floor.
The EMTs literally rolled Toonman into the procedure room, I was escorted still schelpping to the a chair in the Cardio Cath recovery area.  I played Angry Birds Level 7-3 ... its the best distraction/time waster I know.
In what seemed like no time, Dr L came to tell me it was done; the heart is undamaged except for the aortic valve and 'some' blockage in I forget where but not to worry Dr S will clean it out when he replaces the valve.  I got to see Toonman, still a little woozy from the drugs, kiss him and remind him that his heart belongs to me and he has to take care of it.   After a short wait for 'transport' which never showed up, two CC RNs rolled him (with me schlepping) into the elevator and to his room in the CCICU; his nurse is lovely, the place is so nice and quiet.  I sat with him for an hour,  I could see he was falling asleep, I kissed him many times goodnight and still schlepping his stuff I went down to the street to get a cab home.
Uptown St Luke's is at 113th and Amsterdam the cab traffic uptown is not as good as on Tenth Avenue/59th St so I waited a bit for a cab, in warmer weather I would have walked home.

When I got home I read all the truly wonderful emails, text messages (thank you CBW) and FB replies (thank you to all my friends) before eating a half box of chocolates (thank you again Faye), playing WORDS (thank you Annie) and then going to sleep.
And now I to shower, have some lovely hot blueberry rooibus and then clean up this place, go get beautified™ and head up to visit my honey.