I mean to get these up earlier but that would mean I would need to get up earlier and that would set off a domino effect ... trust me, I dont want the cats singing outside the bedroom door any earlier than they already do.  Neither of them would make the cut on American (or any other) Idol show.

The whine, no, the topic du jour (bet you didnt know I spoke French?) is snow.  Not the snow coming, no, the snow still here and how it made my stress levels rise, not that I really thought that was possible. 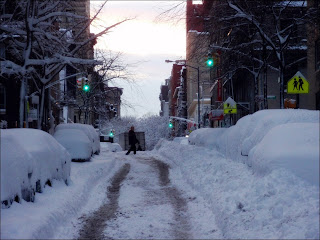 Let's take the way back machine to last Thursday.

I dont know where you were last Thursday but I was here in my office, (see those tracks in the snow in the photo?  They're from a snow plow; I walked up that hill at 7 a.m. in the plow tracks because no one had shoveled the sidewalk yet) until it was time to meet Toonman at a doctor appointment.  The same doctor we saw on Monday at St Luke's on the first floor (why is it the first floor but you need the elevator to get there?).

On Monday the waiting room was a sea of humans with barely an empty seat to set in.

On Thursday when I arrived I expected even more people waiting because I had spoken to the doctor's assistant earlier in the hope she might find a later appointment but no, she said they were triple booked.  Triple booked. I cant even begin to understand that concept ... even airlines only double book.

As in no one was there except a receptionist.

After a phone call or three I learned that if its Thursday, the doctor is in his office on Second Avenue not Tenth.   I am not going to drag out this story, trust me I could.  But I feel for you .. so ...

We got a cab (I am also not going to tell you how I asked  Toonman to wait under the awning while I went out into Tenth Avenue to hail a cab and he came after me to tell me I needed to be on the north corner vs the south corner if I was going to get a cab .. well trust me the corner didnt matter ... ) and headed to the eastside.  I told the driver where we were going and he decided the best way to get to the eastside (we were on 59th Street and had he headed straight across we'd have been on the eastside in minutes) was to head uptown to 79th Street because 'midtown is a mess'... wellllllllllllll ... the doctor's office is on Second Avenue between 44th and 45th Streets so Toonman told the driver to cross at 65th St.

And then the cab crept for almost 20 minutes through the transverse. 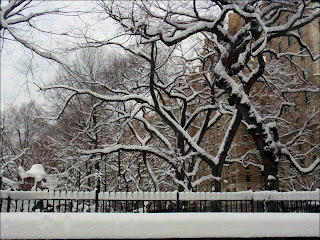 I took out my camera and snapped a few photos to keep from reaching through to throttle the driver.

We finally did get to the doctor's office ... and I did promise a short version so I'll cut to the end. 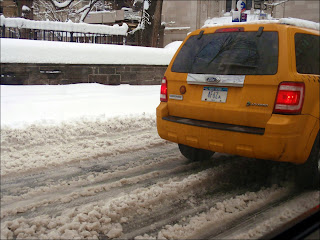 Toonman is having surgery on Wednesday which is a good thing .. I'll keep you posted.

And I didnt forget the Giveaway winner announcement ...

I conducted the picking of the winner by calling Toonman just now and asking him to pick a number between 1-33.

#17 was Ashley.   Congratulations Ashley .. I'll be emailing you the instructions for claiming your prize!

And thanks to all the new followers .. stick with me, lots more monologues and photos and giveaways coming!