Guest cook Mojo sent me this delectable recipe and the accompanying photos ...

There is no right way to cook. There are, however, a lot of wrong ways. There are no rules. You figure out what will go together, and cook it using the technique best suited to what you're making. In this case I'd heard about "Stuffed French Toast" at some restaurant or other, and started wondering how you'd go about making such a thing. This is what I came up with.

I knew I wanted to do something with cream cheese and fruit. My first choice would have been strawberries and/or blueberries, but the strawberries at the store I went to were pretty scuzzy, and the blueberries -- what there were of them -- weren't much better. But they had peaches. Big, mutant, giant peaches. So I got some of those to replace the strawberries. 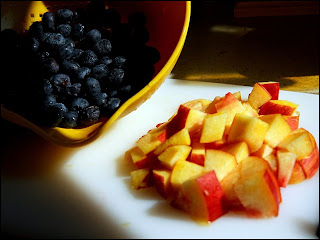 Next item on the list was cream cheese. The purist in me wanted to get the old standard brick of Philly cream cheese, but I opted for the whipped stuff for two reasons: (a) it would be easier to mix the fruit into it without destroying it and (b) it would spread easier on bread that wasn't toasted. As an alternative, you could just go get some cream cheese from the nearest bagel place that's already got your favorite stuff in it. But I wanted the fruit identifiable, so I made my own. 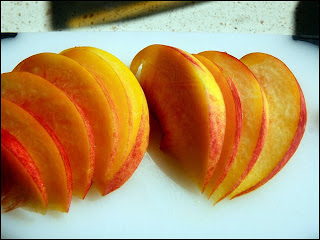 The peaches (as I mentioned) were giant mutant peaches, so I only needed one. I sliced off about 10 thin slices to use for a garnish, then diced up the rest to mix with the berries. Then I folded the fruit into the cream cheese, trying not to puree it in the process. (I was mostly successful.) 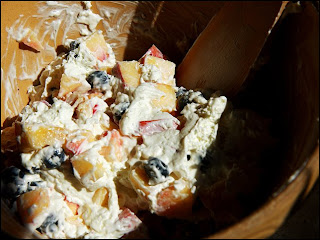 Next, I spread the fruit/cream cheese mixture on one slice of bread and dropped a second slice of it on top. (I wound up with about 1/3 too much filling, but it'll be good on bagels, so it's cool.) How much filling you use is up to you, I put it on as heavily as I thought I could and still be able to seal up the sandwich.

When it came time to seal it up, I didn't get real carried away. You could crimp the edges with a fork or something, but I was afraid the chunks of peach might poke holes in the bread if I tried to seal it too tight. SO I just pressed the edges together with my fingers and called it a day, figuring that the egg batter would do the rest of the job for me. 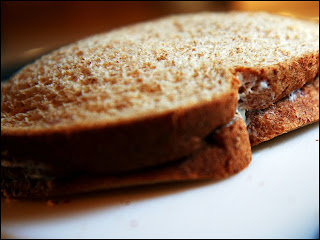 Now everybody I know who makes French toast has their own twist on the egg batter and every one of them swears it's THE best way to make it. And they're all right. The "best" batter is the one you like. I'm gonna tell you how I made mine, but you can figure out your own or uses a different recipe if it suits you. As long as it seals up the bread, you can't really go wrong. I started with 3 large eggs. Some people use egg whites, which is a perfectly acceptable substitute. To that I added enough half-and-half to liquefy the eggs. You can use milk, skim milk, soy milk, or even water if that works for you. The only thing you're trying to do is make the batter more liquid so that it mixes and covers evenly. At this point, you can stop adding stuff to your batter and you'd be perfectly fine. You've got all the required elements. But when I do it, I add a little bit of cinnamon to take the edge off the sweetness and a little bit of brown sugar which does two things: (a) it adds flavor and (b) it caramelizes somewhat as the sandwich cooks which gives it a little crispness on the outside. Normally I'd add a dash of vanilla extract too, but on this particular day I discovered -- too late -- that I was out of it. Once you've got all your ingredients together, whip it up so that everything is blended evenly. Some folks like to whip the bejeebus out of it until it's frothy, but I don't see that as necessary. You're not making an omlette here, and there's really nothing to be gained from the extra work.

Next step is to get your cooking surface hot and melt some butter (or some equivalent of it) on it. I have an electric skillet, which I like because it has actual temperatures on the controls rather than "Low-Medium-High". But if you don't have an electric skillet/griddle, a regular skillet on the stove at a medium/medium-high heat works just fine. The idea is not to brown the outside before the inside is hot.

Once your cooking surface is ready, dip your sandwich in the egg batter making sure you coat it completely. Leave this step until now, otherwise your bread will turn to mush which is not what you want. Then drop your sandwich on the griddle/skillet and brown on both sides. If your skillet isn't too hot, the cream cheese will get kind of gooey-melty and the fruit will be hot -- or warm at least once the outside is brown.

Once that's done, top it with your condiments of choice and eat up. When I did it, I put a smear of butter on top, then artfully arranged the sliced peaches from the first step and topped the whole thing off with maple syrup. But feel free to use whatever suits you. 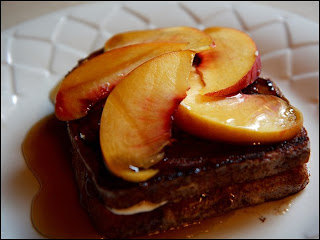