My friend Mojo, who has contributed photos to themes here in the past, is not just a photographer, he is also a cook .. and he sent me this:
I've attached a couple of examples of my culinary prowess (to which Wendy will attest). Not your kinda eats I know, but for us omnivores... nom nom nom. The first is what I call Go To Hell Nacho Burgers which goes a bit like this:
A bunch of 93% lean ground beef
A couple of medium-to-large onions, medium diced
A green bell pepper medium diced
An assload of chili powder
A metric assload of Worcestershire sauce
Your salsa of choiceSome shredded cheese of your choice (my personal choice is a colby jack mix).
Mix up the ground beef, peppers, onions, chili powder and Worcestershire in a big bowl
Portion out in balls (your choice of size, mine are probably 3/4 pound or better)
Form into patties and grill to order
When you turn the burgers for the last time top with salsa and shredded cheese
Serve on Kaiser Rolls
Take the bows. 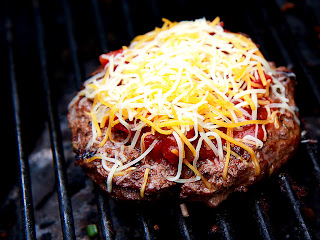 The second is even simpler. In fact, it's so simple I can't bring myself to give it a name.
Johnsonville Hot Italian Sausage (I've tried others, but this one gets my vote for awesomeness)1 or 2 medium-to-large onions sliced into ribs
1 green bell pepper sliced into ribs (are you sensing a theme here?) enough olive oil to coat the veggies
Now here you have some options.
I have a steel "grill wok" (seen in the photo) that I use for veggies, but you can do them on the stove or in a skillet on the grill or whatever.  I toss them around in the olive oil so they're coated since I'm doing them over open flame, but if you were doing them in a conventional skillet you'd want to use conventional saute technique.
Grill the sausage until done  Serve on hoagie rolls, topped with the onions and peppers and your choice of condiments (My personal fave is Emeril's Kicked Up Horseradish Stone Ground Mustard... BAM!)
I've had sex that wasn't this good.  For reals. 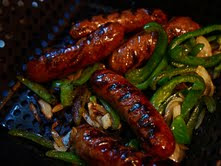