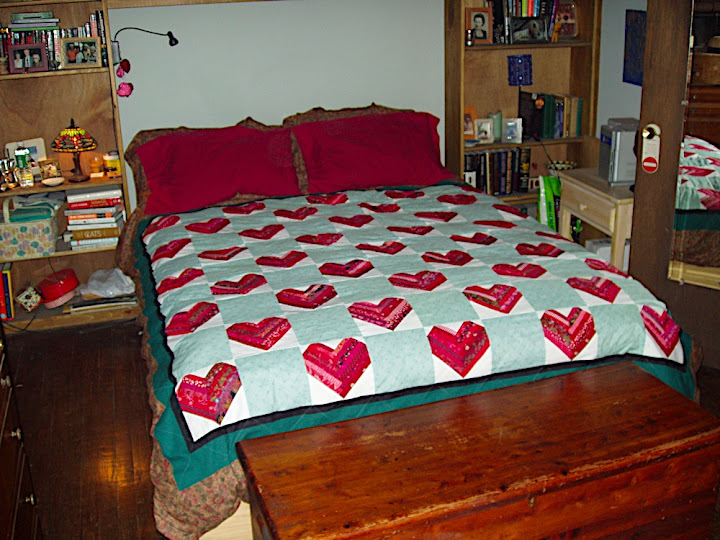 That is a duvet cover I commissioned several years ago.
It was a work of love and art.
But with a down comforter inside it was too heavy so eventually it was folded up carefully and put away.
This past summer I met a blogger, Marlene Charbonneau of Living on the Spit, whose crafty blog drew me in and we got to know one another through blog comments and emails, or so I thought. I asked her about re-working my duvet cover into a quilt. She thought it was something she would be interested in doing.
She participated in this summer's BlogFest in Virginia so I brought the duvet cover with me for her to look at, give me a price for her labor, any materials she might need and postage to send it back.
After she looked it over, she quoted me a price that seemed extremely fair.
She was to remove the back panel, add some batting to the already lightly quilted top and replace the back minus a flap that would no longer be needed.
She told me she loved getting fabric and would take the equivalent of the fee in fabric from an online store (Fat Quarter World). I purchased a gift certificate in her name for the amount of the fee she quoted less $5. I sent her the $5 in a thank you card.
Shortly after she said she had begun working on the project her daughter was hospitalized and she said having the project would help her as she sat with her daughter. I told her not to worry about the project, take care of your child.
Then she got sick. I said please take care of yourself, the project can wait.
Weeks passed and I heard nothing, so at the beginning of September I emailed to ask how it was coming.
She said she had two more seams to go, she was hand sewing it. I said great!
Then it was the beginning of October, the 1st to be exact, and getting cold.
I sent her this email:

Its getting VERY cold here and we are really not just wanting our quilt but also needing it.
I dont mean to sound pushy or unappreciative but in mid-July you said it would be done in 2-3 weeks .. its now 3 months later ...
I know you are busy and its a tedious task so really if you are still hand sewing the last 2 sides just pin it/pack it up and send it, I can get it finished here. ox

She replied: she got it in mid July, it been 11 weeks not 3 months. She and her daughter had been ill ... the email exchange ended with her writing she'd be mailing it off on 'Monday'.
Its October 20 ... the package arrived yesterday ... its postmarked October 10th and the quilt?
Well, its in pieces.
There's the top with the same amount of batting as it had originally.

The back is in 4 pieces.

Nothing has been sewn ... nothing has been done, except its now its in pieces.
She took it apart and never did a thing about putting it together!
To say I am angry doesn't come close ... to say I am furious doesn't come close ... my head was throbbing last night as I looked at what she did to something so beautiful.
I paid her in full, up front, for something she destroyed.
And since I have no way of ever getting my money back, I decided I would tell the world what she did.
Petty?
Maybe but I don't take to being lied to well.
Yeah.
Angry doesn't come close to how I am feeling. 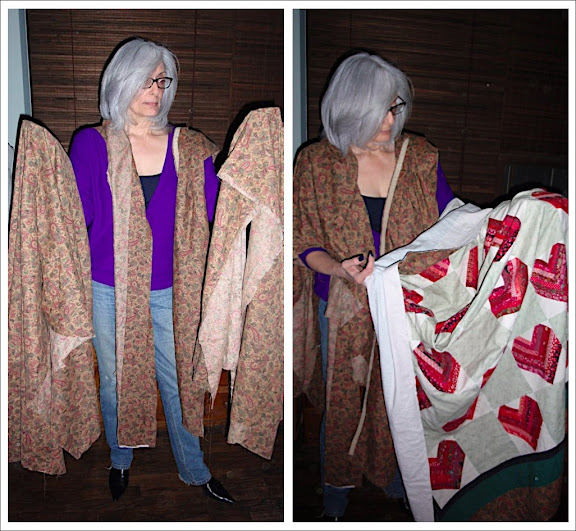