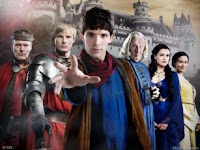 I dont normally do this but ...

Last night after the Open was over for the day and we'd had dinner ... we turned on the TV ... there was nothing on.

On NBC (channel 4 here in NYC) there was the premiere of a new series called Merlin.

Well I am a lover of anything Camelot so I decided to see what it was about.

Perhaps had I read something about it before clicking over to NBC I might not have watched.

Its begins with this nice young man walking towards a town ... there's a voice over explaining this is young Merlin on his way to Camelot ... what?????

Merlin on the way to Camelot as a teen? WTF?

Anyone who has ever read Mary Stewart's trilogy about Merlin and Arthur or T.H. White's Once and Future King knows that Merlin did not come to Camelot til he was an adult.

If the writers of this disrespectful re-telling of Merlin and Arthur read either of those authors, they would know that Uther Pendragon fathered Arthur but he was taken from his mother moments after birth, and raised as a commoner til he found his way to Camelot and pulled the sword, Excalibur, from the stone.

In this version Arthur is a spoiled teen aged prince who lives with his father, Uther, and his father's ward Morgan ( WTF? Morgan was evil and tried to lure him away from Guinievre, who by the way, in this version is the handmaid to Morgan!)

Teen aged Merlin is a warlock and is told by a dragon that Uther has imprisioned in a cave beneath the castle (and what a cave it is, its deeper than the Grand Canyon, that's some amazing foundation to the castle which looks modern in some shots and ancient in others .. did you ever see a castle with wall to wall carpeting or a chess piece statue in the 'hallway'?) that he, Merlin, is meant to guard Arthur, to help him become a great king and keep the bad guys at bay ..

I turned it off after Merlin told Arthur to tell Uther that Knight Valiant (I swear!) was using magic to win sword fights ... Knight Valiant's shield had 3 snakes on it which came alive and bit the opposing knight ...

Seriously .. I am so insulted I am going to find out who wrote this crap and send then T.H. White's book ..