I woke during the night thinking it was morning but it was only 3 a.m. so I went back to sleep. And at about 8:30 the sun through the window woke me again ... I sat up, threw off the covers and was about to stretch when I looked down and saw what seemed to be worms ... or ant-like worms on the sheet and pillowcase ... to say I jumped is an understatement ... I also put on my slippers and went directly, still in PJs, to the lobby to see the manager.

The guy at the front desk was not the weekday guy. This guy spoke English perfectly. I tried to be as calm as I could but I was angry and upset. The desk clerk was calm, he said he would send the maintenance man up to look. I said I have looked and I know what I saw. I want to see the manager. He explained the manager would be by 10, to let the maintenance man come up to see the ''problem'' AND he offered me another room.

The maintenance man and I went back to my room. He looked at the bed, the little bug/worm/ant whatevers and pronounced them termites.

I said skeptically: termites? In a bed?

I said I still want to see the manager.

Meanwhile I started calling the other hotels in the area.

The Catalina Club was full.

The Shelbourne was full.

So were all the others I called. I was desperate so I called the Delano. Yes, they had a room but at $600 a nite plus all sorts of taxes/surcharges I decided it was too steep and said so. The reservation person asked if I wanted her to check The Shore Club.

They did have a room which she began to describe .. I interrupted: How much is it? She told me and I said I will take it. It was only slightly more expensive than three days at the San Juan would have been and I didnt intend on paying for a buggy room.

At 10:15 I went down to the lobby. The desk clerk said the manager was on his way so I sat down to wait. Within 1o minutes a young man entered the hotel, went to the office behind the desk and then came out and walked to where I was sitting.

He was handsome, had a very calm demeanor and genuinely looked upset/concerned. He offered me his hand and apologies immediately. And I calmed down immediately. We went up to the room and he looked around. He apologized again. He agreed these were not termites but he had no idea what they were. He explained the property was under renovation to upgrade it and with all the construction going on, maybe ... nevertheless he said he was sealing the room and having it fumigated. AND he said he was not charging me for my stay. I told him about the woman I met in the elevator on Thursday evening and he said he would look into it ... seems no one told him about it.

So off we went to put the yuckiness of the morning behind me.

We walked to the Bass Museum ... its an amazing place but no photos are allowed. Check it out online. 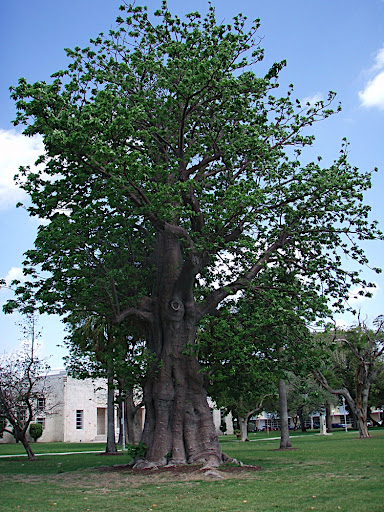 This amazing tree sits on the 'lawn' of the Bass Museum.

As does this two-sided sculpture 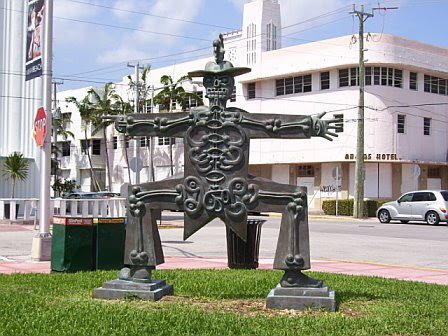 these 2 photos taken by L. 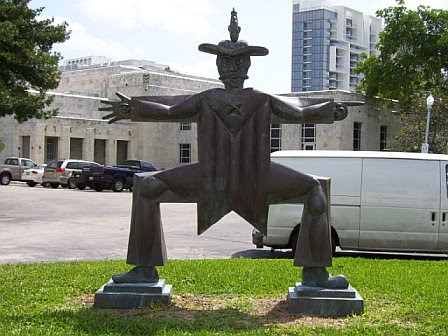 After the museum we decided to wander along Collins Avenue toward North Beach and the older bigger hotels that face the bay with private beaches behind them.

THIS is the low rent side of Collins. 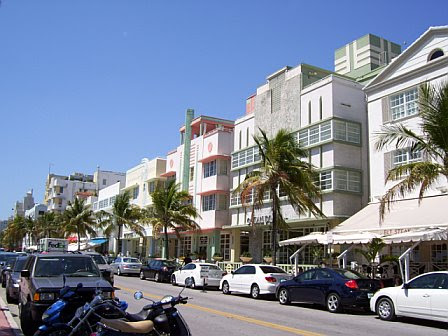 this photo taken by L. 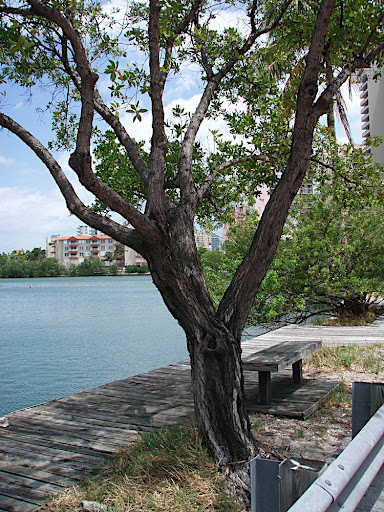 This tree and bench were alongside the bayside of Collins in the 30th St. block. 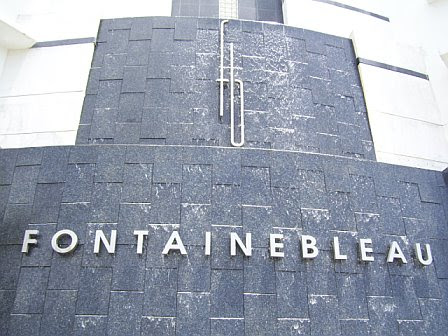 this photo taken by L.

We got to the Fountainbleu and I learned the reason we were on this walk was to go to a sports restaurant which I am happy to report was no longer in business.
But right across Collins was this: 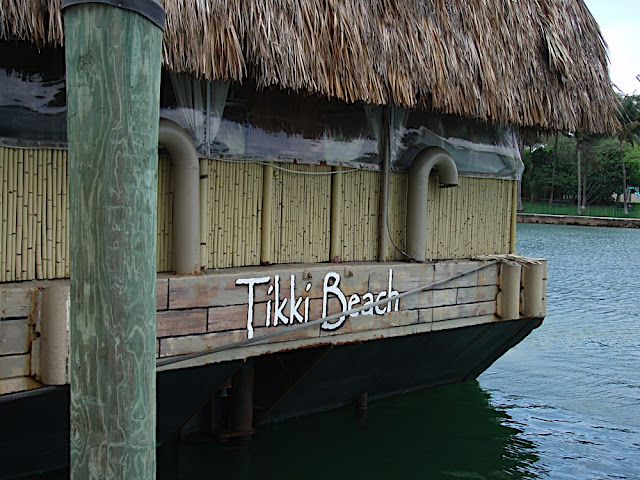 Unfortunately, it was closed for a private party.
So we walked on and eventually found a little restaurant/bar where we had lunch. 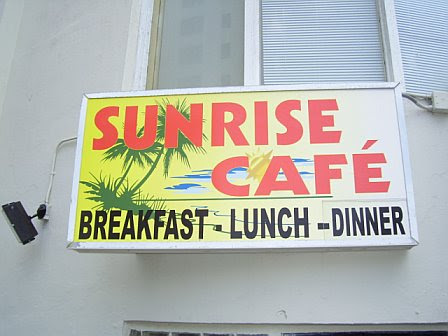 this photo taken by L.
While we were eating the Shore Club called to say my room was ready.

We walked back and passed some interesting photo ops on the way: 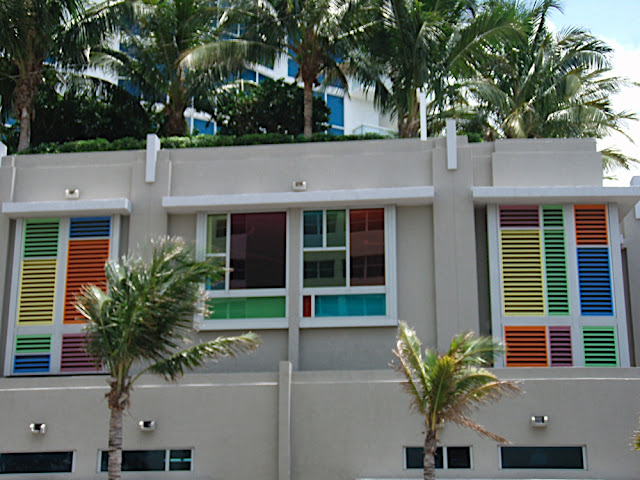 The Mosaic on Miami Beach 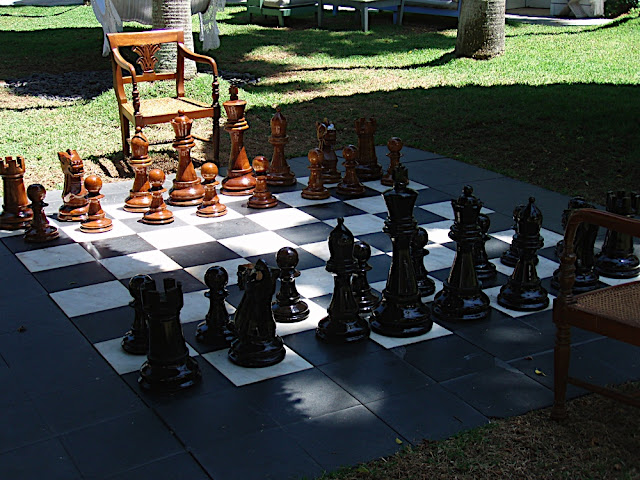 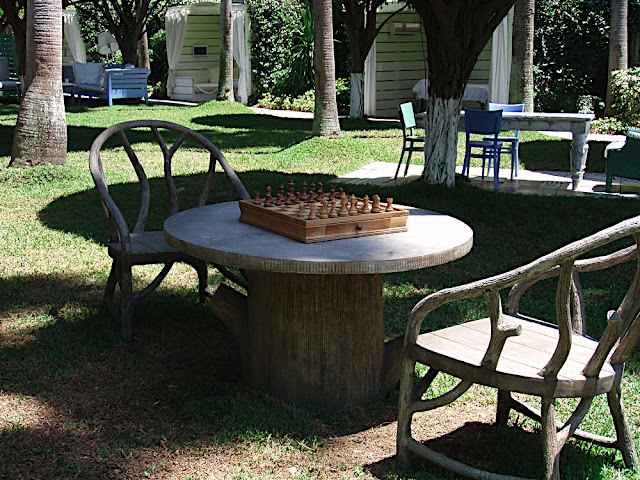 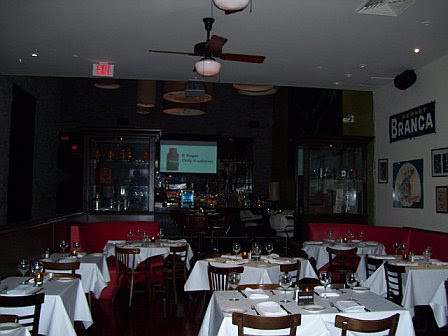 this photo taken by L.
We went to dinner at a nice Argentinian restaurant in the Lincoln Avenue outdoor mall. 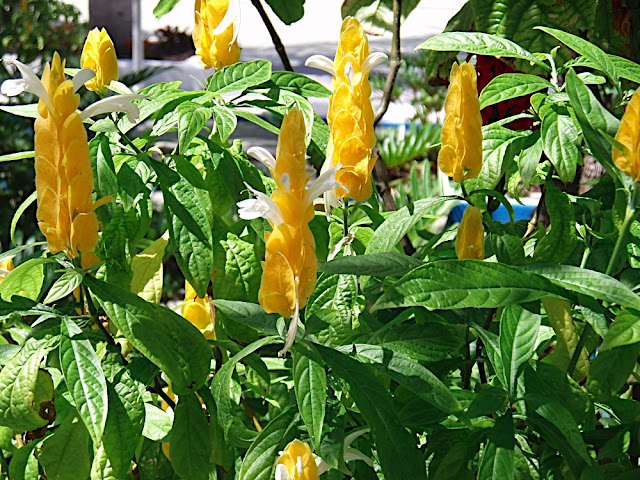 Where these odd plants were growing

After dinner we walked back to The Shore Club and went to have a drink in their outdoor bar. The wind was blowing and it was late and I had to get up at 3 a.m. to get to Ft. Lauderdale Airport for a 6 a.m. flight ... K & L weren't leaving til midday Sunday so we said our good nights and goodbyes and I went up to my room where earlier I had unpacked and spent a long time in the amazing shower... 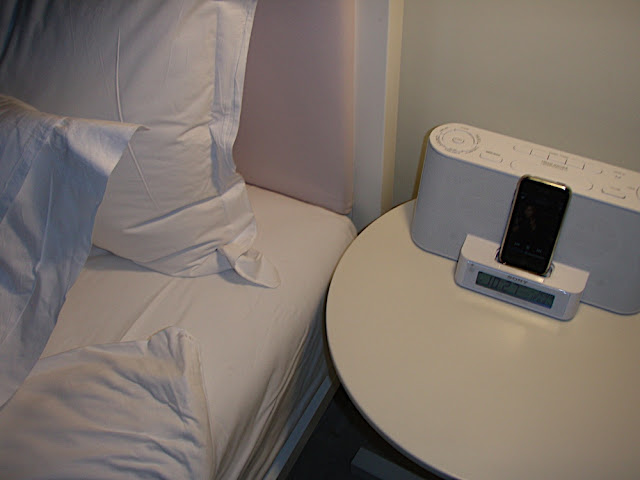 I did wake before the 3 a.m. wake up call, dressed and went to check out, hopped a cab and when I got to the airport it was odd to see it deserted ... the baggage check and security dont 'open' til 4:30 .. so why do the airlines insist you arrive 2 hours prior to departure?

I sat in the waiting area, iPod'ing it ... til this woman sat down and asked if I would watch her bag which she assured me contained only her shoes while she went to find a bathroom. When she returned she started making phone calls and speaking LOUDLY .. I turned up the volume on my iPod and tried to tune her out.

When we started boarding she told me she was in row 8 .. I inwardly groaned, so was I. She saw my lack of enthusiasm and said 'don't worry, I wont bother you' .. to which I replied 'thank you' and she said 'oh you must live in Manhattan' ...

Dont you know she sat right next to me? I sat with eyes closed, earbuds in and slept while she talked the ear off the poor guy to her left.

Plane landed 15 min. early, car met me on time and I was home hugging Husband and petting cats and unpacking by 9:30.

BTW .. it was hotter in NY and the surrounding states than it was in South Beach!

I cant wait til next year .. I am lobbying for New Mexico ...