And so begins Part 1 The Recappage of my get-away weekend in Florida's SoBe (South Beach, Miami).

First a little back story.

Back in the late 1990s I surfed my way onto a soap opera message board (yes, I am addicted to All My Children) where over the next several years I formed friendships with several of the other posters. We began meeting once a year in April for a Gal Pal Weekend. So far we've gathered in NYC, Chicago, New Orleans, Nashville, San Francisco and Cape May. Our numbers increase or decrease depending on finances, vacation days and/or family issues. We have been as many as 7 and as few as 3 but no matter where we go or how many of us go ... we always have a wonderful time.

I jetted out of LaGuardia last Thursday morning on JetBlue to Ft Lauderdale where I would grab a cab to Miami.

After boarding and settling in I looked around to saw the cutest pup sitting a few seats away! 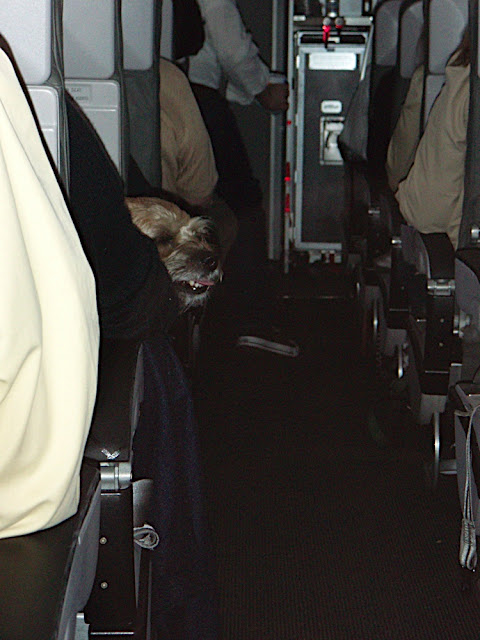 I kept trying to get a shot without being too intrusive and when that didn't work, I got up, camera in hand, walked down a few seats, crouched down and introduced myself.

Hi, I blog and I love dogs. Would it be okay to take your photo? 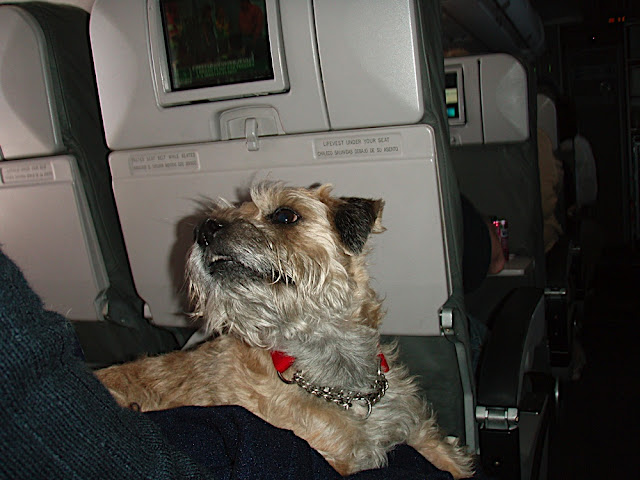 He looked to his person to see if it was okay 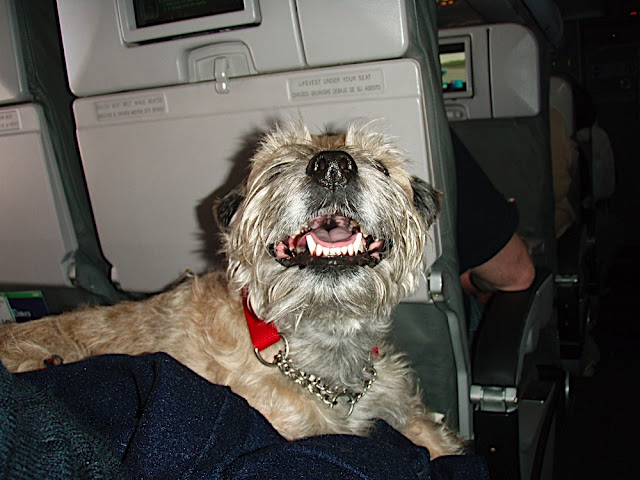 Wait, let me give you my BIG smile 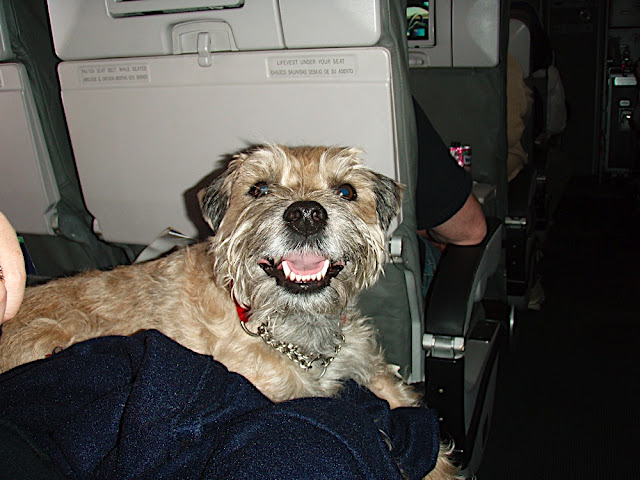 My name is Archie, I am a service dog.
This is my person, Nancy Freedman, The Taskmistress.

After Archie was nice enough to pose and introduce me I went back to my seat to read.

But within a few minutes I noticed the flight attendant with a large cannister of oxygen followed by Nancy who stopped to ask if I would watch let Archie sit on my lap with me for a few minutes.

So Archie and I settled in and waited as Nancy helped the flight attendant locate a doctor to help a sick passenger. Once the passenger was feeling a bit better, Nancy picked up took Archie and went back to their seat.

We'd determined she was also going to Miami too ... I offered to split a cab with them but she told me she was renting a car and asked if I wanted a ride, she said she would drop me at her hotel where I could get a cab to mine. I was totally fine with that.

We went to get our luggage and then to Hertz to get her rental car.

The sun was shining ... the temps were in the high 70s as we drove down to Miami.

It turns out we do the same sort of job.

She works freelance, hence the name Taskmistress, while I work for a large corporation.

I am including her website URL so if any of you ever need someone to kick butt for you over a bad bill or any other task you don't have the time or inclination to resolve on your own, call her ... I promise you will be glad you did.

Because we were talking, she missed her turn off and ended up driving me right to the door of the small, under renovation Art Deco hotel called San Juan which is located on Collins Avenue on the 1600 block.

We said our goodbyes, promised to keep in touch and off they drove.

I, being the impatient NYer I am, crossed against the light in the middle of the block dragging my rolling mini case behind me.

After checking in I got a text from my friend K advising she was unpacking in the adjoining room. We spent some time catching up waiting on our other friend L. Once she arrived and did a little unpacking we all headed out to take in the sun and check out the 'hood!

After a lengthy walk we went to dinner at an old, past its appeal, Cuban style restaurant .. K and L had Cuban sandwiches, I ordered a yellowtail fish sandwich which I thought was going to be tuna but turned out to be gross not tuna but some other fish ... deep fried .. tail still on! ... lucky for me I also ordered rice and beans and we all had Sangria.

When I got back to my room I saw that the phone's message light was blinking. Since no one knew I was there I knew the messages were not for me; I went to the front desk to ask them to clear it.

The desk clerk didn't speak much English and my Spanish is non existent, so I rang for the elevator. A woman got on with me and seeing me press 3 she asked how the rooms on 3 were.

I replied I was sure they were the same on all the floors.

She proceeded to tell me they had arrived at 5 pm, went to the beach and dinner before coming back to unpack and settle in. She said her sister was sitting on the bed talking to her when suddenly she jumped up screaming there were bugs!!! She said she reported it to the desk clerk who apologized and moved them from the first floor to a room on the second floor.

I was totally grossed out a little unnerved, immediately I knocked on K& L's door, telling them what the woman told me. We pulled off the covers and sheets to check both beds in their room. All clear!

Next we went into my room, made sure my room/bed were also bug-free.