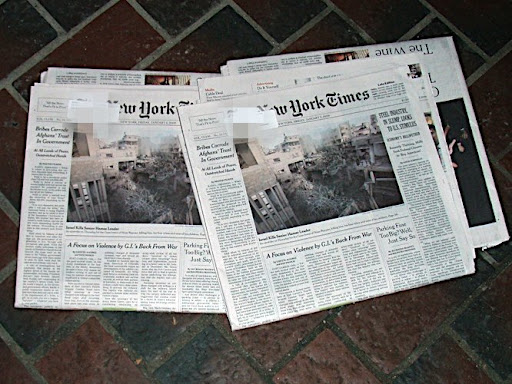 Over the last few weeks, maybe 2 months, the morning newspaper has been delivered later and later.

Was a time when it was there when I went out at a few minutes after 6 and I could give the front page a scan before going to work .. not so lately.

This week its not arrived before 8 a.m.

So yesterday morning I waited to hear the THUNK of the papers hitting the floor of the vestible that is practically outside my apartment door. When I did, I went out to say something.

The deliveryman was already across the street tossing and walking up the block ... braving the cold I opened the front door:

Excuse me, I said loudly but in a questioning tone

I no write the labels, he shouts back

No, its not about labels; you need to deliver the paper earlier.

Hey you know I got 300 deliveries, lady, you no like, you cancel.

Okay, then, I'll call the Times and tell them.

I closed the door, it was fa-reezing, come back inside and call the NY Times; the nice representative, Sharla, apologizes for the late delivery promising she will tell the Dispatcher.

Do I think the paper will get here earlier?

After all it took me weeks of calling every morning to get the delivery people to stop leaving the newspapers on the sidewalk. "Open the front door to the building, its not locked", I said calling over and over til finally they 'got it' ...

Pavlov had the right idea.

I wonder where I can connect the current ... ummm