Its 8 years since the incredibly crisp, fall sun filled day of Dad's funeral.

After my parents retired to Florida my sister and I spent a long weekend with them every fall … we would celebrate Dad’s birthday, the fun culminating in a dinner with my parents’ oldest friends George & Hazel because Hazel and Dad shared October 20 as a birthday.

Dad was in his early 80s when he suffered a heart attack. Thankfully it was mild. Unfortunately his lungs were weak so surgery to repair his heart was not an option. He had two other small cardiac infarctions before the meds he was on put things ‘right’.

Over the next 10 years his health declined slowly; their trips to NY to spend the month of June ended when he could no longer fly due to heart issues and Mom couldn’t spend 2 days on the train – she insisted the first-class stateroom my sister reserved for them was like a coffin - they actually flew home because she couldn’t handle the return on the train. That day was the longest day I ever experienced worrying about how he would handle the stress of the flight. He was fine.

The trips to NY were officially over.

My sister and I began to visit them every 3-4 months for a long weekend even staying at a nearby hotel rather than stress them out by staying in the condo and upsetting their routine. That was not something either of them liked, they would have preferred we stay with them but we insisted.

Mid-June 2000 my sister, Husband and I flew down to celebrate Mom & Dad’s 54th wedding anniversary. We arrived to find him disoriented and Mom out at a doctor’s appt. Before long the day really bottomed out when we got the call that Mom had fallen breaking her shoulder. Much later we’d learn that Dad's confusion was due to a small stroke.

The party was cancelled after we spent most of the day in the ER with Mom. We cancelled our hotel reservations and literally camped out at the condo arranging to get home care givers in place before we flew home on Sunday.

I cried from the minute we got into the car to the airport that Sunday. Both my sister and Husband kept telling me there was nothing to cry about, everything was going to be okay.

But I knew this was the beginning of the end. I am not a religious person but as we flew home I looked out the window at the clouds formations, one looked like a castle and I thought ‘that’s heaven’ …and I started to cry again. 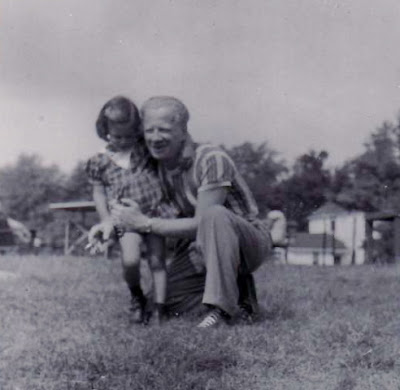 Dad and I had a very close relationship. He was my daddy, my hero. He had yellow hair and blue eyes and I wanted them too. There wasn’t anything he did that I didn’t want to do. There was nothing he ate that I didn’t eat; if he didnt like a food, neither did I. When I started school we’d sit together in the evenings and discuss what I learned. He taught me to appreciate photography letting me use his Rolieflex. He taught me to appreciate puns. And he was the smartest man I ever knew til he wasn’t. He was very optimistic about that. He said it was scary to become so stupid but relieved when I realized he was smart again.

There are times now when I think back to those days when I was so rebellious, so disrespectful, and hope that I didn’t hurt him too badly. Once it took an intervention by Dad’s sister (The Aunt) to mediate peace after he grounded me over an argument we had and took away the car keys. I told him I didn’t need the car but who was going to drive him to work? Surely, not me. What a horrible thing that was to say to a man who was legally blind! The Aunt sat me down and told me I was to apologize. That even if I thought I was right, I was wrong. I was young, I could bend while he could not. Somehow that got through to me and I did apologize and this man who loved me unconditionally never mentioned how much I had hurt him. 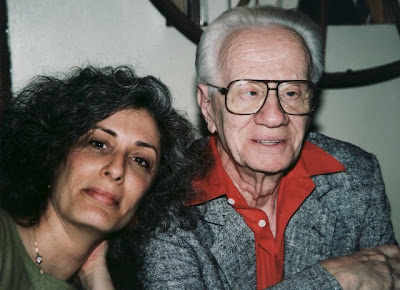 After he died we went though the papers in the safe deposit box, I found a letter he saved. I can’t read it for the tears but I don’t have to because its burned into my memory. It was an apology for a long past birthday I had almost forgotten.

The last 6 months of his life I stopped working to spend weeks at a time in Florida with both of them helping the home care givers. At the end of August Mom broke her hip and was in a rehab facility; Dad was in a wheel chair because his legs could no longer support him, his lungs were not good, the strain on his heart making him very weak.

One night the cushion he used to sit on in the chair deflated. I looked everywhere in the condo for the pump gizmo to re-inflate. When I couldn’t find it, I took it, got into the car and started driving.

Even now I am not sure where I was going or what I thought I could do at 10 pm at night. I was crying. I was talking to God. I wanted my daddy back. This was not fair. This was not right. Somehow I ended up at the fire rescue station. My eyes swollen with tears. The fireman who opened the door took one look at me and the deflated cushion in my hand and said ‘stop crying, its going to be alright’. He gave me a glass of water drink while he inflated the cushion. I suspect he had a daughter of his own.

At the end of September 2000 I was offered a job that I simply couldn’t refuse. I told Dad I would be back before his birthday.

On Thursday, October 19th my sister and I flew down to spend the weekend with Mom and Dad. Mom was still in rehab so we picked her up the afternoon of October 20th and brought her home to spend the day/evening with us at the condo.

After dinner we took her back to the rehab facility she was very upset because Dad had been very spacey; he spent a lot of time sleeping and occasionally when he was awake he was confused. From time to time he spoke to people who weren’t there. Mom was having trouble coping with how much Dad had deteriorated over the time she was in rehab. His rapidly deteriorating health worried us but she just couldn’t come to terms with it. She said ‘I am not ready to lose him’. None of us were.

We spend Saturday with Mom at the rehab place then my sister and I had dinner with Dad at the condo. That night he had very bad dreams and none of us slept well.

Sunday morning we had breakfast with him, he was very alert but very tired.

When it came time to say good bye and leave to catch our flight we hugged him. I started to cry. He said 'stop, don’t cry, no matter what happens I will be alright'. In that moment he was who he had been: my daddy, strong and sure.

We weren’t home 2 hours when we got the call from his care giver. He’d told her he was very tired and was going to take a nap. She settled him into bed and went to do the laundry. When she came in to check on him he wasn’t breathing so she called the emergency rescue team and they pronounced him dead.

A sort of calm settled over me. He was no longer in pain, no longer stuck in that hated wheelchair, he was at peace. My sister and I called Mom’s care giver and told her to go to the rehab place before we called Mom, we didn’t want her to be alone when she heard. It was one of the hardest calls I have ever made.

We flew down to Florida that Monday and learned that Dad had set up all the necessary details for both his and Mom’s funerals years before. At the end of the week we all flew back to New York to bury him.

Sunday, October 29, 2000 was a perfect fall day. Temps in the 50s, the sky clear cloudless blue, the sun shining as we stood around his grave listening to the Rabbi.

When the Rabbi was done, with Husband on my left, my sister on my right; I spoke.

I said he' been so excited to live to see the Year 2000 arrive, to have celebrated it with his wife, his daughters, his son-in-law.

And how I knew he was alright because he told me he would be.

I still miss you Daddy. 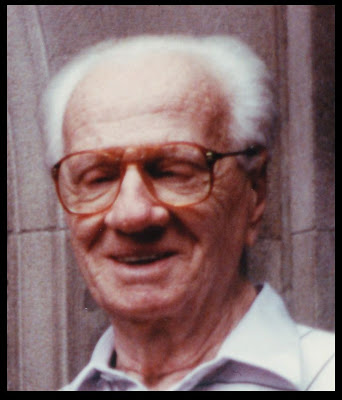