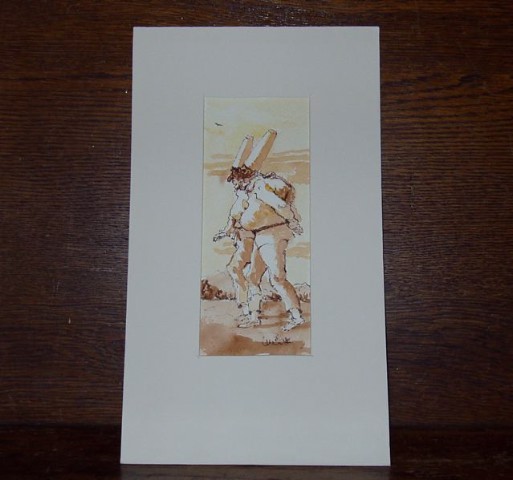 Shortly after I got home from Venice Husband heard from someone who works with D that Bridezilla sent D a list of people who had not sent HER a wedding gift. The person who told Husband this also said they were astonished that anyone who attended the wedding in Venice would need to give a gift since going there for a ‘second’ wedding was gift enough. AND they told Husband that our names were at the top of the list of non-gift givers.

We discussed this and eventually settled on sending something small but something they would/could use that would not set us back as much as the dinner place setting SHE registered for at Michael C. Fina …

A week or two before Christmas D and I were out and about together and at lunch she told me that Bridezilla had told her that if we, Husband and I, were invited to the annual Christmas day dinner SHE was not coming. D told me that B told Bridezilla it was his home and we were his friends and she would treat us politely and not make a scene and she, D, was asking me to try and smooth things over … to please apologize to them for the gift. I was somewhat taken aback but agreed to write them a note explaining that the gift was not intended as a slight … and I did.

Here’s what I wrote:

Congratulations on your new home! I had lunch with D on Sunday and she was
telling me about it. I wish you lots of happiness.

She also told me that there still seems to be some issue about the gift Husband & I
sent for your wedding. And so I think we need to clear this up once and for all.

My intention was to send you Euros to spend on a wonderful dinner and/or bottle of your favorite wine during your next trip to Europe … when I mentioned this to Husband he was not happy, he felt this wasn’t a good idea. Men. He insisted on going to B and asking his advice. B said “they’re registered at Williams-Sonoma”, and so Husband told me “we need to get something from there”.

One evening rather late I went to their website and looked over the list of gifts you’d registered for. There weren’t many choices left … but I did see 2-3 items that related to tomatoes ... a press, a peeler, and I forget what else (its been a while). I bookmarked the page and planned on showing it to Husband in the morning .. well I didn’t, I guess I forgot. When I did remember and showed it to him the tomato ‘stuff’ was marked as purchased ... and all that was left was a $500+ toaster and some smaller items … now I am going to be brutally honest here .. there is no way I would ever spend $500+ on a toaster unless said machine baked the bread, toasted it, ate it, and gained the weight from the calories ingested. So that left the citrus thingies ... I said to Husband I really would prefer to send them Euros .. he said: this is something they want and will use.

Now you know the story ... there was no insult implied or intended. No emotionally wrought hidden agenda. Just a bad choice. I will say this though (and it may not sit well but since we’re into clearing the air, I need to say something) … in all my life no matter whether what I given was good, bad or indifferent, I accepted it and said thank you .. I may have put it aside to ‘pass along/re-gift’ or scratched my
head in wonder but I never ever didn’t acknowledge it or turn it into a personal
attack.

I hope clears the air for all of us.

I look forward to seeing you at Christmas and to, hopefully, in the spirit of the
season, putting this behind us and moving forward.

A few days before Christmas D told me that they got my letter but SHE was still whining about how this wasn’t an apology but an explanation … and D begged me to just say I was sorry so we could all move past this. I agreed to do it for her.

And so I sent off an email which said:

I am sorry your feelings were hurt.

The bad choice of wedding present was just that - a bad choice.

I got an email reply back saying

Thank you daryl for saying that. It means a lot to us. I am sorry if
you were hurt by anything we have done, but we have been really
upset and sad.

I had a really good laugh since I still hadn’t apologized and never would/will.

Christmas was stress free and I even got them a couple of nice mugs as a gift … they didn’t get us anything.

And so things seemed to be amicable until …


lived, written and posted by daryl