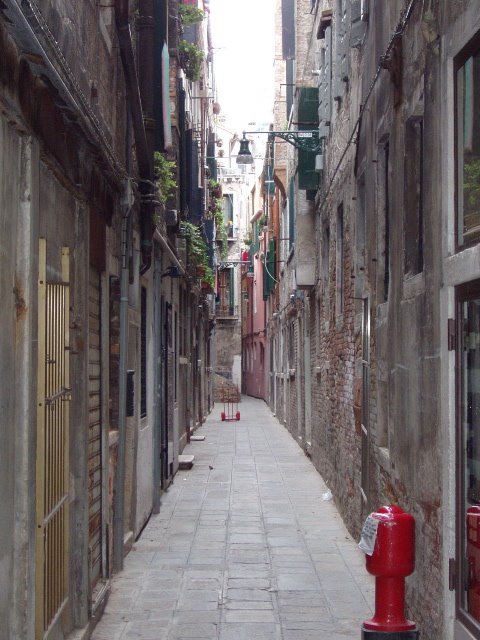 So as July was approaching I stepped up the discussion and pressed him on where he wanted to go. I wanted to go to Hawaii. He, it turns out, didn’t want to go anywhere.

His rationale was, not necessarily in this order: Gus, our cat was on meds and he didn’t trust anyone to dose him; he hates to travel; he really doesn’t like the beach… I think there were more reasons but I countered with: San Francisco! He seemed to think this was a good idea before turning around and saying: I don’t want to be a tourist.

Now this is a hard one to argue if you are talking about travel outside your own apartment.

He suggested that we stay home and I take off a few days; that we could do things around town.

Then he said how about we stay somewhere, a hotel, for the evening of the actual anniversary. He said he could give Gus his meds at night and then we’d go out to dinner and to the hotel and have a cozy evening.

And you’d get up to go home to give him the morning meds? I asked

I said I don’t want to go anywhere. I have changed my mind and honestly I realize now that I should never have put such emphasis on an anniversary … it was silly .. after all it’s just another day.

And then I proceeded not to talk to him for about 3 weeks.

Okay. So that’s the back-story sort of. How did this get me to Venice you ask … well here’s how.

My very best friend D’s Son met this young woman in Los Angeles and about 2 weeks later she moved into his apartment here in New York. She seemed to be a really nice kid.

Everyone except Husband liked her immediately. He disliked her on sight.

After she’d been here for a few months they got engaged. And almost immediately she changed from this nice kid into Bridezilla. Seriously. My friend D went into business with her, to help her get established here on the East Coast and within weeks Bridezilla was being outright rude to D. For some reason D’s Son seemed unable to see just who this woman he planned on marrying really was. All of D’s friends sided with her. It was clear to us this Bridezilla was out to be the Alpha Bitch of all time.

Shortly after D, our friend F and I threw a bridal shower for Bridezilla at La Cirque, no less, she, Bridezilla, announced that she wanted to get married in Venice. Italy.

She wanted a BIG wedding… a satin ball gown from Reem Acra … a large bridal party….

Her parents, who she was on the outs with, were courted to pay for it. D’s Son agreed it was a wonderful idea. And then to make sure things went her way, she decided they needed to move back to Los Angeles where she could keep him all to herself and away from his friends and his family .. any of whom might convince him this was nuts.

D and her husband offered to throw them a huge reception here if they married in New York or even Los Angeles and then they could go to Venice on a honeymoon.

She refused. In fact she got downright nasty about it.

After they moved things seemed to calm down, we all realized that if he was happy that was all that mattered and it was just a wedding. All D’s friends agreed to attend.

I told Husband that I was going to Venice, to the wedding. He was sort of relieved since now I was getting my trip and he could stay home with his cat.

D and I shopped for dresses. I found the most amazing ink blue evening gown at Calvin Klein and she had a dress made by Robert Danes.

There were a lot of flare ups … bitchy nasty snide attacks on D by Bridezilla so that by the time we got to Venice I out and out hated the woman.

Oh .. and this wedding, this all important wedding in Venice that was the be all, end all of her life? Well, it turned out it was just a way to torture us all. Because they got married in Las Vegas 3 months before the Venice wedding! Apparently Bridezilla was afraid Son was getting cold feet so they went to Vegas for Memorial Day weekend and she suggested a quickie wedding!! AND she made Son promise not to say anything. Unfortunately the truth, as always, slipped out and it served to really cause major problems. D had been denied the joy of seeing her only son, her only child married. The “ceremony” in Venice was meaningless on many levels but we were all committed to attend. So we would.

Bridezilla handed down edicts. NO black was to be worn to either the rehearsal dinner party or the wedding/reception. Why? Because black is the color of mourning and these were celebrations of life AND apparently according to Bridezilla, Italians find the color black funereal and she didn’t want to offend the family of her former roommate who lived in Venice and were going to attend.

The men in the wedding party were told, not asked, told to wear brown suits.

She had flowers ‘forced’ to bloom for the early October date.

She organized a trip to Murano so those attending could see the glassware she wanted and buy them for her.

She “let” D and her husband pay for the rehearsal dinner at a small wine bar which was closed to the public for the evening … the 40 people attending enjoyed Perseco, sushi and amazingly flakey bread under the stars in the palazzo of the wine bar.

To both the rehearsal dinner AND the wedding .. I always suspected they thought the brown edict was bull and were ignoring it OR they knew it was NOT a celebration of life ... or maybe I was just projecting ......

On the afternoon of the wedding we were ferried by motor boat to the small Anglican church where we watched Bridezilla and Son exchange vows. And then we motored back to the hotel garden for a reception which included all the guests being sprayed with mosquito repellent. There was a dinner with many courses but I have no idea how the food tasted because my throat began to feel scratchy during the wedding ceremony. By the end of the last course I was in my room in bed with a fever.

By Monday evening I was feeling better and in the lobby of the hotel with some friends when Bridezilla and Son came in … there was some joking and teasing and I said something in jest which Son took pretend offense to and then Bridezilla asked what I said .. Son repeated it and she flipped out … I said I was kidding but she launched into me and I let her blow thinking once she had her say she’d shut up and get over it .. it was a joke.

Well I was wrong. Not only did she not get over it, she wrote me a letter and left it with the desk clerk. Nasty. I put it away thinking I would have little to do with her from this point on .. wrong … but that’s another story for another day …