I am working on the Eight MEME that Mental P Mama tagged me for ... with .. whatever, I AM working on it. I had no idea I watched so few movies 8 times ...who'da thunk it.

AND I am writing the next installment of The Bridezilla Chronicles.

Meantime, did I tell you that "we" (Husband and my Sister) and cousin M took The Aunt to dinner this past Saturday? Thought I might have.

As you know I cannot tell a short story ... so sit back, grab a snack and listen up.

A few weeks ago The Aunt called me at the office.

Are you busy? she asked

Why aren't you busy, don't they give you enough to do?

Okay, I lied I am busy

Are you available for dinner in June?

When exactly are we talking about?, I ask

She hems and haws and I know what the reason is.

Is M coming to town?

Okay, I promise I will go to dinner with you so you dont have to spend time alone with him.

I should explain that M is a nice person. He is caring and thoughtful but his idea of conversation is a constant barrage of questions and The Aunt, like my father who was her older brother, has little to no patience for things like that.

She laughs and says thank you. As soon as I know when he is coming I will call you.

I say I promise to make myself available.

SO .. when she called a week later to tell me dinner was going to be Sunday June 22 I said no problem. She then told me she wanted lobster and so she was going to make reservations at a seafood place she likes on City Island.

Until I thought about it.

To get to City Island I would need to either rent a car or take public transportation that was complicated, time consuming and required sticking to a schedule/timetable.

So I spoke to my Sister and Husband asking them what they thought about taking The Aunt and M to dinner here in the 'hood. They thought it was brilliant.

I called The Aunt.

How about we go to dinner in the city, I begin

I dont like to travel, she says cutting me off

You wont have to. We will get a car service to take you into Manhattan and then pick you up and take you home

The car service I use wont know how to get into Manhattan and I dont think they will want to come pick me up.

Of course they will.

After a lot of back/forth like that she agreed ... especially after I told her about Calle Ocho a latin fusion restaurant I love. She had been to Cuba as a girl and still loved to tell stories about it.

The week before the scheduled dinner she called to tell me M was mistaken about his travel dates so could we move dinner to Saturday night? Sure, I said, and I quickly called and changed the reservation AND I emailed my Sister to tell her.

As Saturday approached I realized I had not heard back from my Sister so I emailed again and asked if she got the earlier email and was she coming. She replied yes.

On Saturday morning around 11 I called The Aunt to give her the address of the restaurant.

Oh, she said when she answered the phone, you're finally up.

I replied: I am not only up I am getting a manicure.

Oh you are .. and why didnt you call me earlier?

I didnt want to wake you.

What time is the reservation?

I hope I can make it

I didnt answer because it was like taking to my late father ... I counted to 1o ... If you get stuck in traffic or if you are early call me on my cellphone to let me know.

I'll think about it, she said

At 4:45 Husband and I walked over to the restaurant. At 5:05 I called my Sister who is never ever late ... her phone rang at least 4 times and I was sure she on her way when she answered.

I said: Why are you still home?

Where should I be?

Did you READ it?

Its M. We're at the address you gave us but we dont see the restaurant.

We're at the address you gave us but we dont see the restaurant ..he repeats

With that Husband walks toward a car that is now backing up ... he opens the door to help The Aunt out and gently walks her to the curb ... M is dashing around from the other side of the car to help too .. we hug .. he asks about my Sister and I say she's on her way.

As we're sitting down M realizes he left his camera in the car and dashes off to call the car service. The Aunt turns to me and says: He'd forget his head if it wasnt attached AND you need to find him something bland to eat he says he cant eat 'this sort of food'. 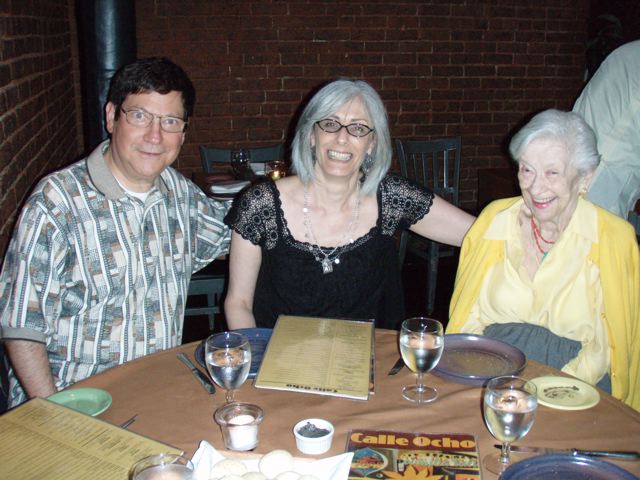 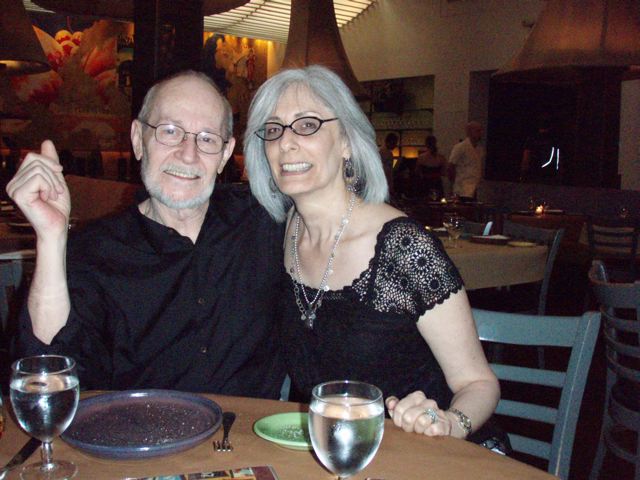 I am surprised. I emailed him asking if he had any food issues and he said he didnt eat sushi or sashimi. Since they dont serve that here I didnt think there would be a problem.

She says he told her he cant eat Cuban food.

I am confused ... the restaurant doesnt serve Cuban food ....because I am a mean girl when M gets back to the table I reiterate what I said in the email reminding him of his response.

He says SHE told him it was Cuban food. Well its not, I say, and you can always have a nice bland piece of chicken. He declines saying he will find something.

With this we all look at the menu and decide on drinks .. The Aunt says she wants 'that drink with Cranberry Juice' .. so we order her a Sea Breeze. We order appetizers which both Husband and M pass on, however when they arrive M eats them anyway.

My Sister arrives in time for the appies and we all order entrees .. dinner is delightful and its not til we're almost all through that the place gets crowded and NOISEY.

When the check comes The Aunt takes out two credit cards and says to the waiter .. which one would you like?

I try to catch his eye to stop him from taking either of them .. I wave my AMEX card at him but he doesnt see ... Husband is off at the mens room. M is calling the car service to request a pick up and my Sister is looking at me like I am crazy.

In the end, after much back and forth, The Aunt pays the check and I am permitted to pay the tip.

We walk them out to the waiting car .. hugs and kisses all around .. and off they go ...

And yes, everyone tells Husband he looks just like George Carlin, may he rest in peace.

oh .. and now you can see where my silver hair gene comes from ... we think M dyes his hair!