Skip to main content
June 21, 2008
Ah .. I am back from my weekly beautification™.
This week included getting hairs cut. I have the best hair cutter in the city and she really knows me and what suits me. I personally wanted to go shorter but she insisted this was short enough ..
Husband who thinks any hair cut is too much asked "Did you donate what she cut off to one of those charities?" ... HA HA .. I really didn't have LONG hair ... but it was a little longer than it is now .. 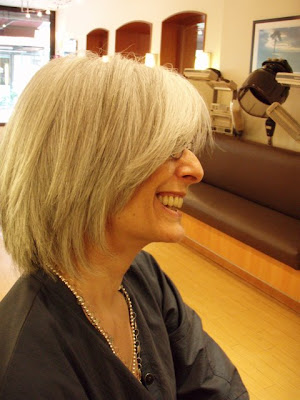 And I am glad you enjoyed meeting our late cat Sans .. she was pretty funny and this photo was just one of many where she made faces for the camera.

Tonight we, Husband, my Sister and I, are taking The Aunt to dinner along with a cousin (not her son, but her nephew) who flew in the Colorado to see her. She turns 90 on June 30 but Cousin couldn't be here then and The Aunt's son and DIL are on their way to Minnesota for some sort of pilot certification something so its going to be a small non-party since The Aunt refuses to allow us to fete her .. in fact she is insistent she will be paying for dinner ... we'll see.
When The Aunt was about 10 year old she went to Cuba with her parents. My grandfather had a sister living there at the time and they visited her. The Aunt still tells stories about the trip and how she went to night clubs with them .. she saw Xavier Cugat perform ... anyway we're taking her to a restaurant called Calle Ocho which has a 'Latin Fusion' menu. She is going to love it and I am hoping for more stories about that trip to Cuba.

So now I am going to go spend some time with Husband and catch up with you all tomorrow .. or should I say manana!