how i met my man 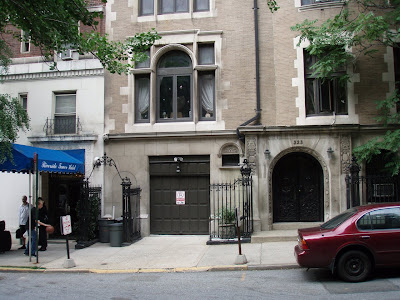 Back in the days of sex, drugs and rock & roll I was working for a man who was going through a divorce. He moved into Manhattan from NJ and rented an apartment on the Upper Westside. Every time something was to be delivered I had to go wait for it; it got me out of the office so I didn’t mind too much and I loved the boss's ground floor apartment its living room with its two big front/street facing windows and the cozy bedroom looked out on a cement covered 'yard' but you could see trees in the other backyards.

One weekend when my boss was going to be out of town he asked if I wanted to apartment sit.

Sure I did.
I called my friend E. Come on into the city, hang out with me, I said.

Saturday afternoon I ran into this guy in the lobby, he introduced himself, we flirted a bit and he invited me to a party in the building that night but first he said he had to finish helping his friend (and the owner of the brownstone), B, get something done.

While they were working my friend E’s boyfriend S came by. It never ceases to amaze me what a small world it is. It turned out E’s boyfriend knew B!

They got to catching up on old times; B invited E, her boyfriend S and me up to his apartment.

I was sitting on this leather Chesterfield sofa in this huge high ceiled room in this amazing duplex with a fireplace and leaded glass windows that stretched up to the second floor ... it was right out of a movie set.

While everyone else was talking, I sort of tuned out, daydreamed about living in my boss’s apartment and being a couple with the guy I met earlier… it was very surreal.
I remember this like it was yesterday, the feeling was so odd, so strong. Really.

Later that evening I went to the party with the guy I met. Infact, we hit it off so well I spent the weekend with him!

Back at work on Monday I knew I had to make that daydream a reality, I just knew he was the man I would marry ... in fact I chased him until he caught me.

After a year of ‘dating’ I moved into his apartment.
Three years later we married, our 30th wedding anniversary is July 30th…
Oh , the former boss’s apartment? … its where we live now… really.