Telling you’all about how I met Husband brought back many memories.

As the assistant to the head of the music department at a major talent agency I got to meet a lot of famous and semi famous people, but most of my day to day contact was with the concert/venue bookers.

People like Jules Belkin in Cincinnati who whenever he called would give me the weather report and warn me ‘its headed your way’.

Ron Delsner, here in NYC, was above talking to a mere assistant but his assistant, Jon, and I got to be friends and I got to hang out backstage at a lot of concerts.

The summer of ’73 was one of the most fun times I ever had with or without illegal substances.

Delsner promoted the Wollman Rink Concert Series in Central Park that summer with perfomers running the gamut from well known to unknown.

Billy Crystal was doing stand up w/Rob Reiner and opening for rockers like Todd Rundgren.

Backstage was actually a double wide trailer where everyone from agents to hangers on hung out.

A few years ago I was leafing through a magazine supplement when this photograph caught my eye. 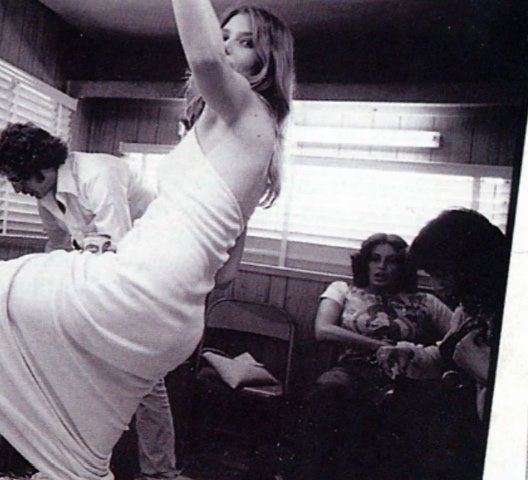 It was part of an article Cameron Crowe wrote around the time Almost Famous was released. The photo is of Bebe Buell former model and former girlfriend of Todd Rundgren and the inspiration for Cameron Crowe’s Penny Lane character.

As I looked at Bebe my eye was drawn to the background where this girl was sitting.

I thought to myself: I had that same tee shirt!

Looking closely I realized it wasn’t just like my tee shirt.

It was my tee shirt.

Talk about coming face to face with your past...

There are lots of other adventures. I dated Jackson Browne’s road manager and traveled with him on the band bus along the Eastern seaboard when they were promoting For Everyman. Linda Ronstadt was the opening act.

Oh those were wild and crazy times. Jackson’s manager also managed an all girls group called Fanny .. does anyone remember them? I traveled with him to Atlanta when they performed there … ah the memories …

edited because someone pointed out I had my chronology backassward.. sorry