The only reason I am up is because my tummy insisted.

I really wanted to sleep in.

At 3ish I woke because I heard this  noise I couldn't place. Husband, of course, was sound asleep. I sat  up and listened. Yup.. a strange sort of .. well I can't describe it without  telling you what it WAS .. it was Rosie with the leg bone of the  Tandoori chicken my sister had for dinner.

She was sitting on the floor  at the foot of the bed licking/gnawing the chicken bone.  I got up, took it  away from her and went into the kitchen where the garbage can was  overturned. Empty food containers and some food (clearly  NOT things she wanted) were strew on the floor (its a good thing our  kitchen is small .. ).  I cleaned it up and tied the top of the  garbage bag (someone should have emptied it during halftime) and then  looked around the living room. Gus was all innocent perched on  the back of the couch. I found pieces of chicken bones on the  floor near husband's desk too. I was more worried she could have  swallowed a bone and choked than that she made a mess but it was 3 a.m. and lecturing cats does no good so I went back to sleep.

I swear at times its worse than having kids.

Other than the Tandoori Chicken incident we had a really nice day,  though my sister coming over at 6:30 caused me to be so hungry I ate too  much.

Indigo, my favorite Indian restaurant, was closed so I ordered from another called Earthen Oven.   They cook with a lot more spices and specialize in curries which is a good thing, but different than the style of cooking at Indigo, not bad different .. and while I love  spice, I like the Indigo version of Baingan Bharta (fire roasted  eggplant) better .. we had that, Vegetable Biriyani (rice w/  veggies), Palak Paneer (creamy spinach w/cubes of cheese) and Garlic  Nan which would have put my mother's overuse of garlic to shame.  Washed it all down with almost the whole bottle of Malbec; then  after a brief respite of chat we had warm Sour Cream Walnut Apple  pie from The Little Pie Company.. oooooohhhhhhhhhhhhhhh. Is it any wonder my tummy is rebelling? 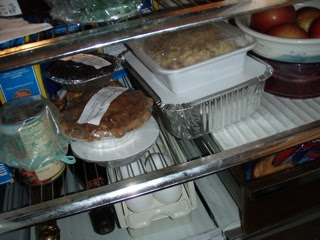 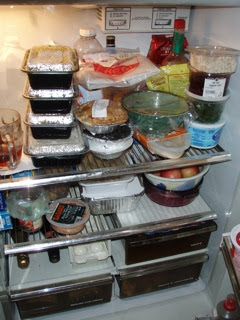